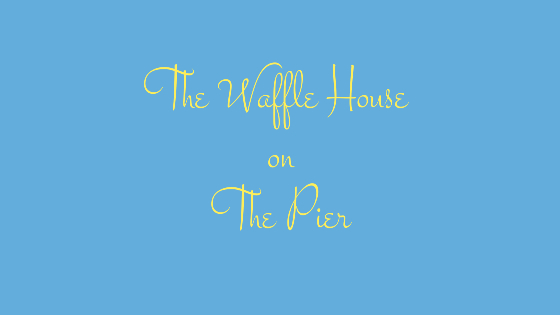 The Waffle House On The Pier is the first book of Tilly Tennant that I’ve read. Set in a beautiful seaside locale, it was a pleasant read.

Run away to Sea Salt Bay, where the sand is warm and soft, the sea is a perfect blue, and a candy-coloured waffle house is about to change Sadie’s life…

But when Sadie’s grandfather dies, leaving her grandmother without an anchor, Sadie must make a difficult decision. She quits her job and moves back home, determined to keep things going. The trouble is, she knows nothing about running a business, and learning at a million miles an hour with a shop full of hungry people isn’t easy. When she nearly burns the waffle house down, she has to admit she needs to get some help.

Her ex-boyfriend Declan promises to be there for her but Sadie worries that getting too close is a mistake – especially as he has a new girlfriend now. And anyway she’s just met newcomer Luke, with his gorgeous suntan and mellow voice…

Sadie’s family have always loved Declan and they’re not too sure about Luke, leaving Sadie unsure which way to turn. A terrible accident at sea forces her to look into her heart, but what if it’s already too late to tell the right man that she loves him?

If you love stolen kisses under the pier, walking along spray-capped shores eating ice cream, and books by Lucy Diamond, Jill Mansell and Jenny Colgan, you will fall in love with this romantic, heart-breaking read.

The story got off to be bit of a slow start, I felt, but then sorted itself out. Having made so many career changes, I can well empathize with Sadie, and her confusion about her career. When her grandfather passes away, she realizes that her was really in running The Waffle House and not in teaching. Having two successful siblings didn’t help. There was subtle comparison and a lot of over-protectiveness from her parents and brother. Added to that was the fact that her grandmother was showing signs of dementia and was more of a handicap at the Waffle House. How Sadie, fights through this is essentially what the story is about.

Then there’s her dilemma with Declan, an old boyfriend, who she had broken off from. Somewhere, she regrets that decision and is constantly seeking the comfort of the known and familiar. When Luke makes an appearance, she is swept off her feet by his charm, but stills holds back because of her confusion about her feelings for Declan.

Family, making choices, trying to run a business against all odds, and trying to trust in love again are the threads that run through this book.

In the end, this is a sweet story of following your heart and finding yourself.

Tilly Tennant was born in Dorset, the oldest of four children, but now lives in Staffordshire with a family of her own. After years of dismal and disastrous jobs, including paper plate stacking, shop girl, newspaper promotions and waitressing (she never could carry a bowl of soup without spilling a bit), she decided to indulge her passion for the written word by embarking on a degree in English and creative writing. She wrote a novel in 2007 during her first summer break at university and has not stopped writing since. She also works as a freelance fiction editor, and considers herself very lucky that this enables her to read many wonderful books before the rest of the world gets them.

Hopelessly Devoted to Holden Finn was her debut novel; published in 2014 it was an Amazon bestseller in both the UK and Australia. In 2016 she signed to the hugely successful Bookouture and is currently working on her next Tilly Tennant novel. She also writes as Sharon Sant, where she explores the darker side of life, and Poppy Galbraith, where things get a little crazier.