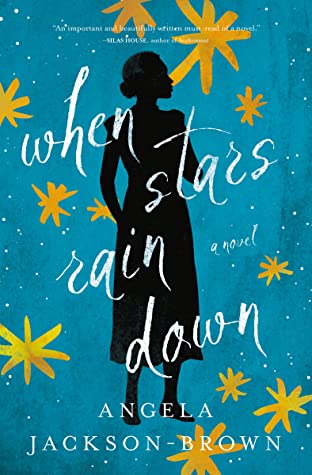 I honestly didn’t bargain for how When Stars Rain Down was going to affect me so deeply. Once I started reading it, I had to read it all through.

This summer has the potential to change everything.

The summer of 1936 in Parsons, Georgia, is unseasonably hot, and Opal Pruitt can sense a nameless storm coming. She hopes this foreboding feeling won’t overshadow her upcoming eighteenth birthday or the annual Founder’s Day celebration in just a few weeks. As hard as she works in the home of the widow Miss Peggy, Opal enjoys having something to look forward to.

But when the Ku Klux Klan descends on Opal’s neighborhood of Colored Town, the tight-knit community is shaken in every way. Parsons’s residents—both Black and white—are forced to acknowledge the unspoken codes of conduct in their post-Reconstruction era town. To complicate matters, Opal finds herself torn between two unexpected romantic interests, awakening many new emotions. She never thought that becoming a woman would bring with it such complicated decisions about what type of person she wants to be.

In When Stars Rain Down, Angela Jackson-Brown introduces us to a small Southern town grappling with haunting questions still relevant today—and to a young woman whose search for meaning resonates across the ages.

When Stars Rain Down by Angela Jackson-Brown

Set in 1936, when the KKK was actively destroying and attacking black people, this is a story of the coming of age of a young black girl, Opal, her grandmother and Coloured Town in Parsons, Georgia. Told through Opal’s eyes, I was drawn into the story immediately. On one hand you have Opal discovering love and romance and yet her very existence is at threat from the KKK. It’s a great story of faith and community in the face of rabid racism and bitter hatred. Opal and her grandmother work for a white family and yet are not immune to the dastardly deeds of the KKK. In fact, one of the main culprits is the cousin of the of grandson of the lady they worked for.

Despite their being a large cast of characters, each of them was well etched out by the author. Opal and her grandmother stand out for their bravery and faith, but there were other strong characters too.

How will the black community stand up to this challenge? What will Opal do to protect herself, her family and her community? Will love win in the end? These are questions I kept asking myself as I read on. I like that the ending was not trite but very believable and in keeping with the who story.

What really shook me about this is that so many decades later, the story still remains relevant for many black communities.

A powerful story and a very memorable read.

View all my reviews