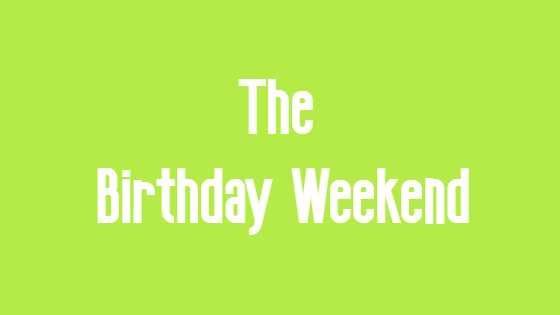 I really didn’t know what to expect from The Birthday Weekend as this was my first time reading this author. However, the blurb reeled me in and as I’ve mentioned earlier, recently I’ve started to enjoy reading thrillers too.

Dear Louise. It’s time we all put the past behind us. We’re meeting for my birthday. I want you there. Love, Amy. X

When Louise receives an invitation to her old friend Amy’s birthday weekend in a cottage next to the woods near their old university campus, a chill runs down her spine.

Fifteen years ago, Hannah walked into those same woods and never came back. Her death destroyed her friends. They’ve not met as a group since. Until now.

As the party gets underway and old grudges are uncovered, a game of truth or dare is proposed. It’s clear one person has questions about their friend’s death – and now they want answers. And nothing will stop them.

When everyone has buried secrets, digging for the truth is going to get dangerous.

A gripping and addictive psychological thriller that will keep you turning the pages, for fans of Gillian Flynn, Teresa Driscoll and Ruth Ware.

When Amy invites her old friends for her birthday weekend, she also wants to honour the memory of their common friend, Hannah who took her own life, 15 years ago. Since the party is going to be near the woods where she died, none of the friends are keen on coming, but they oblige because of Amy.

What transpires is a gripping tale of complicated relationships between Hannah and each of the other friends. Most of the book is told from the perspective of Louise who considered herself Hannah’s best friend. However, even she didn’t know some of Hannah’s secrets. As each of the friends share about their last time with Hannah, a lot begins to get revealed. Was Hannah’s death really suicide or was she murdered? If she was killed, who did it? Was it one of her friends?

I love how the book built up to the end. Intrigue. Secrets. Jealousy. Unspoken hurt. Things that threaten to break old friendships. And finally, the truth.

The book had me engrossed throughout. A great weekend read!

Lesley attended the Curtis Brown Creative 6 month novel writing course in 2015/6, and in 2017 The Orchid Girls (then On The Edge) was shortlisted for the Lucy Cavendish fiction prize.

Read what other reviewers are saying about The Birthday Weekend

Thank you Bookouture and NetGalley for an Advanced Readers Copy of the book in exchange for an honest review.