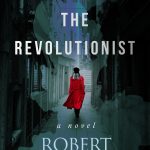 Book Details:
Book Title: The Revolutionist by Robert Tucker
Category: Adult Fiction, 649 pages
Genre: Historical Fiction
Publisher: Tell-Tale Publishing Group LLC / Wise Words Publishing
Release date: 12/03/2017
Tour dates: May 27 to June 28, 2019
Content Rating: PG + M (This book does not contain any gratuitous violence. Any depicted violence is relevant to the historical period, as are scenes of white slave prostitution, sexual and physical abuse, and one of an abortion mill. They are written with sensitivity as to time and place and with appropriate literary language.)
Book Description:
Two different families escape from the political tyranny of their respective homelands, the Josephsons from Sweden and Matias and Kurt Bauman, brothers from Germany and Austria Hungary, with the aid of a Viennese opera diva, Sophie Augusta Rose, and Jean Guenoc, a former Jesuit priest, family friend and protector and partisan of the French underground. Their journey brings them to America in the throes of the industrial revolution during the 1890s and early 1900s.
Ingrid and Olaf Josephson settle on a small wheat farm in North Central Minnesota to raise their children, Newt and Julie. Among the Jewish entrepreneurs forced to leave Germany and Austria-Hungary, Matias and Kurt Bauman re-establish their transportation company in Chicago, Illinois. In search of a secret list of insurgent social democrats, the bounty hunter assassin, Luther Baggot, tracks his victims to the American heartland. Following the murder of their mother and father, Newt, Julie, and their friends, Aaron and Beth Peet, hide from the killer in a Northern Minnesota logging camp. Believing the children have taken possession of the list, Luther tracks them down and they are forced to flee again, this time to Chicago where a different world opens up to them as they are thrust into the turmoil and violence of an urban society and economy careening into the new century.

Watch the book trailer:
[youtube https://www.youtube.com/watch?v=2wUOroNABMw]
The sequel to The Revolutionist. Can be read as a stand-alone novel too.

Book Details:
Book Title: Burton Blake by Robert Tucker
Category: Adult Fiction, 518 pages
Genre: Historical Fiction
Publisher: Tell-Tale Publishing Group LLC / Wise Words Publishing
Release date: 1/06/2019
Tour dates: May 27 to June 28, 2019
Content Rating: G (Depictions of violence are minimal. No bad language, religious expletives, sex scenes, drug use or underage drinking.)
Book Description:
In this sequel to the well-received The Revolutionist, the American journey of three generations locks the neophyte company president, Burton Blake, in a vicious struggle with corporate intrigue, financial greed, and social corruption. Born to a taxi dancer at the beginning of the Second World War, Burton’s father, Elias Blake, never knows his natural father, who is killed in the South Pacific. He is raised by his mother and stepfather from her second marriage who makes his fortune during the post-war real estate boom of the ’50s. Their untimely death by his business partner leaves the boy Elias in the guardianship of his mother’s best friend and her marine vet husband who introduces him to the macho culture of guns and hunting.
Elias’s youth is influenced by the adult world’s drive for personal material gain. Over the next decades, he expands his parents’ original real estate empire into the diversified multi-divisional, multi-national corporation that he leaves to his son, Burton. Upon his forced return from traveling and working with oppressed third world people, Burton learns increasingly more about the true nature of his deceased father as he undertakes the challenges of leading the company in a new direction.

Robert is published by Tell-Tale Publishing Group LLC / Wise Words Publishing under a multi-book contract. The author of four previous earlier novels, Robert infuses his books with unique dynamic stories and characters that portray social and cultural conflicts of their time. His career encompasses many years as a business consultant that have given him access to a wide range of organizations and an appreciation for people in all areas of society. His life experience is reflected in the literary quality of his work. Born and raised in the Middle-West, he has traveled throughout the United States and abroad.
Now retired, he resides with his wife in Southern California where he devotes full-time to writing. Robert is a graduate of the University of California, Santa Barbara with a Masters Degree in Communications at the University of California, Los Angeles where he received the Samuel Goldwyn and Donald Davis Literary Awards.
An affinity for family and the astute observation of generational interaction pervade his novels. His works are literary and genre upmarket fiction that address the nature and importance of personal integrity.
Connect with the author: Website ~ Twitter ~ Facebook
Enter the Giveaway!
Ends July 5, 2019
a Rafflecopter giveaway
https://widget-prime.rafflecopter.com/launch.js