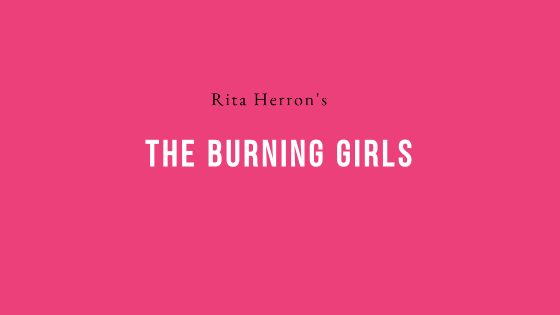 In The Burning Girls, Rita Herron carries continues the story of Detective Ellie Reeves and the difficult cases she solves. Having read Book 1, Silent Dolls and Wildflower Graves, I was eager to read the next book in the series.

The girl was beautiful, even in death. Her skin was translucent beneath the sliver of moonlight peeking through the bare branches of the surrounding pines, and her chestnut hair had tumbled around her pale shoulders. Around her, smoke twisted in the air, curling into the inky sky.

The remote town of Crooked Creek has barely recovered from its most recent tragedy when wildfires tear through the mountains. Detective Ellie Reeves is grappling with her own heartbreak––she has just discovered she was adopted and that her childhood was a lie.

Under the scorching summer sun, Ellie is called to a river where a body has been found. She spots a lone woman’s shoe caught in a nearby tangle of vines, and a pearl necklace scattered by the water’s edge. The remains are surrounded by a circle of stones, which Ellie is certain means something. Was the victim––whoever she was––caught in the fire or is something more sinister at play?

The Fourth of July usually means festivals and fireworks, but when another body turns up the town is left in tatters. A young girl with dark hair lies dead, surrounded by stones, smoke drifting in the air. Thanks to an engraved silver necklace, Ellie identifies the body as eighteen-year-old Katie Lee Curtis, and the diary she finds hidden under the teenager’s mattress could get her close to the killer.

With two victims in less than twenty-four hours, it’s clear Ellie’s up against a serial killer, and she vows that no more innocent girls will be sacrificed. For her, every day is a battle to come to terms with her past, but when this case becomes personal, will she win?

A totally gripping and utterly addictive page-turner that will have you racing through and reeling at the twists. Perfect for fans of Melinda Leigh, Lisa Regan and Kendra Elliot, it’s best read with the lights on!

My review of The Burning Girls

Ellie is still reeling from the double whammy of realizing that she is adopted, putting her whole life and her parents into question and the kidnapping and near-murder of her colleague and friend, Shondra. And the little town of Crooked Creek, still terrified by the gruesome murders by a serial killer who Ellie managed to discover, is now faced with the danger of wildfires.

Ellie enlists the help of FBI Special Agent Derrick Fox as she realizes that the victims though seemingly unrelated must have a common backstory and the Special Agent has access to bigger database.

A fast paced and suspenseful read, The Burning Girls, like the previous two books in the series touch on the “Shadow People” who live in the mountains and have an air of mystery about them. In this story one of these people comes forward and that made me want to cheer! There are many suspects including one of the victim’s father, the Reverend whose church he goes to, who runs a near cult. Then a couple who discover one of the bodies, comes into focus, when the man violently assaults his partner. Somehow, this becomes the key to start unraveling the mystery of the murders. It gets very personal when Ellie discovers there’s a link to her adoption story and these murders. When the local news journalist is kidnapped, Ellie goes into overdrive. Will she be able to save her? Will the murder be found?

The story was full of twists and turns, I just had to read the book straight through.

USA Today Bestselling and award-winning author Rita Herron fell in love with books at the ripe age of eight when she read her first Trixie Belden mystery. But she didn’t think real people grew up to be writers, so she became a teacher instead. Now she writes so she doesn’t have to get a real job.

With over ninety books to her credit, she’s penned romantic suspense, romantic comedy, and YA novels, but she especially likes writing dark romantic suspense and crime fiction set in small southern towns.

Read what other reviewers are saying about The Burning Girls

Thanks to the author, Bookouture and Netgalley for providing me a copy to review and give my honest opinion.