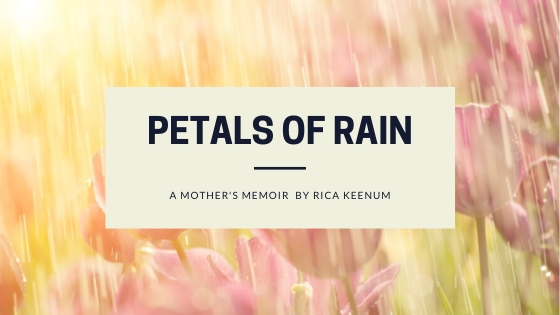 It’s not too often that you have the pleasure of reading an author who you’ve been interacting in for a while. So when Rica Keenum offered me her memoir, Petals of Rain, to read and review, I jumped on the offer. My only regret is that it’s taken me so long to get the review of this lovely book up.

Taking a girl’s voice is the same as taking her power.

This is a memoir about love and loss, secrets and lies. When a young girl from a broken family meets a charming man, she attempts to build a new life. But after a whirlwind marriage and the birth of two sons, their love story rips apart at the seams.

Exploring the impact of parents’ sins on the lives of children and the fates we endure for the chance to be loved, the story follows a mother navigating motherhood and womanhood – an abuse survivor emerging and learning to speak, to scream, to sing to her own wounded heart and to finally understand what it takes to be whole after breaking to pieces. Weaving the present and past together, the author reveals her truth in hauntingly evocative scenes.

As surely as the sun shines behind the grayest clouds, healing comes drop by drop. Like petals of rain.

As I mentioned at the start of this post, I’ve interacted with Rica via our blogs. She comes across as a very peaceful and loving person. So imagine my utter surprise when I began to read her memoir and realized how much pain and suffering she’s been through from her childhood. I just had to read the book right through the night, wondering all the while how does someone like Rica manage not just to survive but to eventually thrive. How did she manage with having so few role models in her life to become a role model for other women?

The answer, I realized, was that the love and acceptance of even one person can be life-changing. In Rica’s case, it was her grandmother who was a very significant influence in her life. She is the one who gave Rica her love for books and literature.

‘But of all the gifts she gave me, the gem of literature shines brightest in my memory.’

When a child is sexually abused and not believed by her own mother, s/he loses her voice. But Rica, with the help of a loving grandmother, learned to tell the good from the bad. Her reading helped her to compare other families with her own. She also learned that pain and suffering can be channelized and one must hold on to dreams and stay steadfast to the voice deep within.

Young and yearning for love, she thought she had found her happily-ever-after in J. They married young and before she knew it, she was Mom to two boys. Sadly, she soon found out that J was not all he pretended to be and their marriage broke.

She moved to Florida to attempt to build a relationship with her Mom, all the while struggling to support her family. She also had to watch one of her son’s struggle with anger issues.

How she managed to come through this with grace and forgiveness and find love again makes Rica’s journey so moving and inspiring.

I’m so glad that I got to read the beautifully and lyrically written Petals of Rain and be inspired by Rica in a much deeper way.