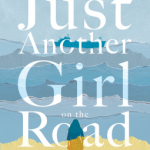 When I opted to read Just Another Girl on the Road, I’m not sure what I expected. Maybe, another WWII book. This one surprised me.

Book Description : Just Another Girl on the Road

Summer 1944:  Stranded behind enemy lines in France, eighteen-year-old Katrinka Badeau escapes German deserters with the help of Major Willoughby Nye. Once an employee on her father’s merchant ship, Nye is now part of an undercover Jedburgh operation, working for the Allies. When he offers her a job on his team, she accepts.

Her work throws her together with Sergeant Wolfe Farr, the team’s tough-talking radio operator, and they embark on an intense love affair. But Katrinka is not prepared to accept Wolfe’s plans for the future. And her love for Nye, which has evolved from an adolescent crush to that of a young woman, still endures.

With the liberation of France, both men are sent to the Far East. Realising what she has lost, Katrinka joins a small entertainment troupe, and sets out on an arduous journey around the world to find Wolfe. But when the three are finally reunited, which love will withstand the test of time?

The first chapter of the book was slightly confusing. There seemed to be so many characters and sub-plots to keep track of.

While initially one doesn’t really like Katrina, you begin to understand and appreciate her bravery and compassion, especially for an 18 year old.

On the whole, I quite enjoyed reading this book.

I received an ARC of the book from the publisher via NetGalley in exchange of an honest review.