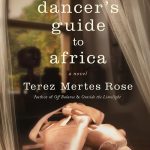 A Dancer’s Guide to Africa

By Terez Mertes Rose
Genre: Women’s fiction (with a crossover into romance)

From the author of OFF BALANCE and OUTSIDE THE LIMELIGHT comes a novel bestselling author Sarah Bird calls “hilarious and poignant.”
Fiona Garvey, ballet dancer and new college graduate, is desperate to escape her sister’s betrayal and a failed relationship. Vowing to restart as far from home as possible, she accepts a two-year teaching position with the Peace Corps in Africa. It’s a role she’s sure she can perform. But in no time, Fiona realizes she’s traded her problems in Omaha for bigger ones in Gabon, a country as beautiful as it is filled with contradictions.
Emotionally derailed by Christophe, a charismatic and privileged Gabonese man who can teach her to let go of her inhibitions but can’t commit to anything more, threatened by an overly familiar student with a menacing fixation on her, and drawn into the compelling but potentially dangerous local dance ceremonies, Fiona finds herself at increasing risk. And when matters come to a shocking head, she must reach inside herself, find her dancer’s power, and fight back.
Blending humor and pathos, A DANCER’S GUIDE TO AFRICA takes the reader along on a suspense-laden, sensual journey through Africa’s complex beauty, mystery and mysticism.

Terez Mertes Rose, author of Off Balance and Outside the Limelight, is a former Peace Corps Volunteer and ballet dancer. Her writing has appeared in numerous publications, including the Crab Orchard Review, Women Who Eat (Seal Press), A Woman’s Europe (Travelers’ Tales), Literary Mama and the Philadelphia Inquirer. She reviews dance performances for Bachtrack.com and blogs about ballet and classical music at The Classical Girl. She makes her home in the Santa Cruz Mountains with her husband and son.
Twitter   | Facebook  | Websites: www.terezrose.com | www.theclassicalgirl.com
On Amazon | On Goodreads

Chapter 1
The first thing I noticed was the AK-47, cradled in the arms of the Gabonese military checkpoint guard. That, and the fact that the man looked angry. He sprang to attention as our dust-caked van rolled to a stop, clutching his rifle close, arms at rigid angles. A steel bar, supported by two rusting oil drums, stretched across the unpaved road, preventing us from passing without his permission. Since my arrival in Gabon seventy-two hours prior, part of a group of twenty-six trainees, I’d discovered military checkpoints were common in Africa. At the first one, outside the Gabonese capital of Libreville, the guard had waved us through without rising from his seat. At the second, a soldier was sleeping in a chair tipped against a cinder-block building. Only the noise of our honking had awakened him. But this third official took his job seriously.
Inside the Peace Corps van, I glanced around to see if anyone else noticed the danger we were in. No one was looking. Animated chatter filled the overheated van. “Um, excuse me?” I called out over the din, my voice abnormally high. “Someone with a big gun out there looks very angry.” My seatmate and fellow English-teaching trainee, Carmen, leaned over me to peer out.
“Whoa,” she murmured, “he kind of does. Cool!”
Her fascination shouldn’t have surprised me. Carmen seemed to embrace the gritty, the provocative, evidenced by her multiple piercings, dark spikey hair, heavy eyeliner and combat boots. Although we were the same age, twenty-two, I would have given her a wide berth back home. Here, she’d become my closest friend.
Together we watched the guard draw closer. His eyes glowed with a fanatic’s fervor, as if he were drunk on his own power. Or simply drunk. The authorities here bore little resemblance to the clean-cut police officers back in Omaha who patrolled the suburban neighborhoods, stopping me in my dented Ford Pinto to politely inquire whether I was aware of how fast I’d been driving. That world seemed very far away.
Our van driver, a short, wiry Gabonese man, stepped out of the vehicle and waved official-looking papers at the guard. By the determined shake of the guard’s head after he’d perused them, it clearly wasn’t enough.
The two began a heated discussion. When the driver held up a finger and disappeared back into the van, the guard scowled, tightening his grip on his weapon. Restlessly he scanned the van windows and caught my worried gaze. And held it.
I am going to die. The thought rose in me, pure and clairvoyant.
I pulled away from the window in terror. “He’s staring at me!”
“What are you talking about?” Carmen peered closer out the window.
“No, stop.” I yanked her arm. “I don’t want him to look this way.”
“Fiona. He wasn’t looking at you. He was looking at the group of us.”
“No, he wasn’t,” I insisted. “He was looking for someone to single out.”
Someone to pull from the bus and shoot. The thought, however irrational, made my gut clench in fear.
Carmen studied me quizzically. “You know, they say taking your weekly dose of Aralen gives you weird-assed dreams. Even violent dreams. You didn’t just take your Aralen, did you?”
“No! And are you saying you don’t find this angry military guy with a gun more than a little scary?”
“I do not. I mean, I would if it were just him and me on an empty road at night. But we’re a van full of Peace Corps volunteers and trainees. How sweetly innocent is that? This is Gabon, not Angola. And besides, do you see anyone else in this van getting anxious?”
I glanced around to see if anyone else was bothered by the danger. Conversations had continued without pause. Aside from the occasional idle glance out the window, no one was paying the drama any attention.
“No, I don’t,” I admitted.
Our van driver returned to the checkpoint guard. He said something that made the guard relax his grip on the rifle. He opened one hand and accepted the two packs of cigarettes our driver offered him. Pocketing them, he gestured to a structure adjacent to his building, and the two of them strolled toward it.
“You know, I’m not sure who won,” Carmen said.
I released the breath I’d been holding. “At least he didn’t shoot off his gun.”