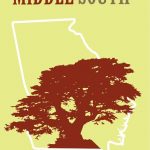 My Inspiration for Writing Middle South

I have always loved to escape into a book. I still make time to read every night before I go to bed. Right before I started writing Middle South, I was reading a lot of funny women’s fiction and the movie version of Bridget Jones’ Diary had just come out. I thought, I can do that too! I had the novel brewing in my head for a while. One morning, sitting on my bed in my parents’, I opened up my computer and started writing. I was in graduate school, and I was annoyed that my parents would never let me live in my own apartment. I started picturing a main character with the independence that I sought—and Layla was born.
It took me forever to finish writing the book. I got consumed by motherhood and kept it shelved for years. After, my mother passed away, I realized how short life is and was inspired to finish it. Publishing it took even longer, mostly because it was hard for me to put myself out there. I halfheartedly sent out a few query letters to literary agents and almost always received the same answer—agents weren’t really interested in unpublished authors. I shelved it for a few more years. That is my biggest regret. I should have tried harder and explored other avenues of publishing earlier. When I finally started working on my second book, I realized it would be a shame not to get Middle South published.

Layla has recently moved out of her parents’ home in the Atlanta suburbs and into an apartment in the city to assert her independence. Between her job as a feature writer for a small newspaper and her social life, Layla has little time to think about marriage and children, much to the dismay of her Lebanese parents.

On a hilarious journey that takes Layla from the Southeast to the Middle East and back, she finds out a little more about herself and what she is looking for in life and in love.
Buy the Book:  Amazon  ~  Barnes & Noble ~ BookLogix
Add on Goodreads

Maya Nessouli Abboushi is a Lebanese American born and raised in the United States. She lives in Atlanta with her husband and three children. This is her first novel.
Connect with the author:  Facebook  ~  Twitter  ~  Instagram